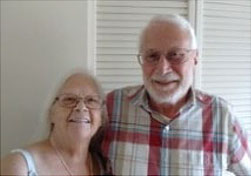 “We’ve lived in this area 21 years and hadn’t joined a synagogue, but attended High Holy Day services where our son and his family worshipped in Coral Springs. But they recently moved to Australia, so we felt the time had come to find a Reform congregation where we could be members. We found Temple Israel and without ever even attending a service – though we did get a tour of the campus and liked what we saw – we joined. A friend has come along with us and now she’s a member, too. What’s more, to our joy, as we were looking through the member directory, we discovered that a cousin of ours is also a member. So, instinctively we know this is the perfect choice for us.” 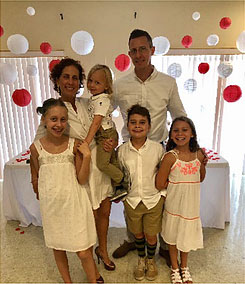 “When we joined, our oldest of four children was just beginning kindergarten and we wanted her to begin her Jewish education, too. Over time with its strong sense of community, TI has become an extended family. We always are made to feel welcome, and we like that we have a voice – our questions and concerns about temple life and being Jewish in today’s world are always addresses, and opinions and input are respected and valued. Because Charles is not Jewish, we especially appreciate that Temple Israel offers the right mix of orthodoxy and orthopraxy and that Rabbi Olshein presents Judaism in a way that anyone can relate to and understand. She really interacts with the congregation and personally engages with children. Further, she and TI actively try to have a positive impact and improve the lives of not just congregation members but the West Palm Beach community as a whole and the world beyond. These values align with ours, and we feel good participating in temple life.” 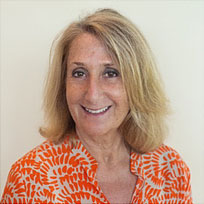 “I relocated to West Palm Beach after a career and living in New York City for 37 years. Starting anew here with no family or friends, I had a hunch that joining a synagogue would provide a valuable anchor. I grew up in an observant and active Reform Jewish family that had bred two rabbis, but I was the religious renegade. What won me over to joining Temple Israel was not only the genuinely warm welcome of the congregation and Rabbi’s engaging and inspirational style of leadership, but the social action programming that benefits the local community. My membership has paid off exactly as I had hoped.” 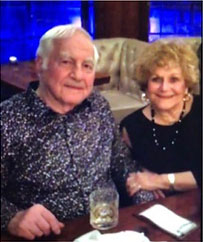 “Toronto is our full-time home and our parents were founding members of acclaimed Holy Blossom. So, we maintain our membership there PLUS are members also at Toronto’s City Shul where our daughter is the part-time Cantor. For all the years we’ve been wintering in West Palm Beach, we tried services at area temples and found none as warm and welcoming as Temple Israel – even compared to the experience in Toronto, TI is very special. The ‘blue cup’ system for visitors won us over, and when Rabbi Olshein was hired that nailed it for us – we officially became members. The compassion and caring she’s shown us is above and beyond. In Toronto we’re not regular temple-goers, in West Palm we are. That’s because of the friendships we’ve made and because Rabbi’s sermons are so relatable and her words, even if sometimes controversial, leave us thinking.” 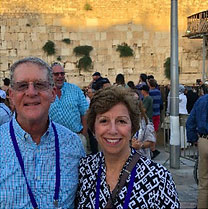 “You might say we were born into TI membership – or at least Carole was. Her family had been members since the early 50s. And, in fact, her mom, Ceceil Tishman, was the first woman to serve as Board president and she also had a term as director of the religious school. So, our lives have been a passage through Temple Israel for all of our family milestones. We were married here – having become childhood sweethearts when we met in West Palm at Jewish Federation’s Camp Shalom day camp in 1966. We celebrated our three girls’ b’not mitzvahs here, their confirmations, and two of them were also married here. We’ve been a part of the synagogue’s growth and its challenges, had our own waves of full-on to dialed-back involvement, but can never imagine our Jewish home anywhere other than TI. It’s a precious legacy for us.”

Newlywed & A Jew by Choice 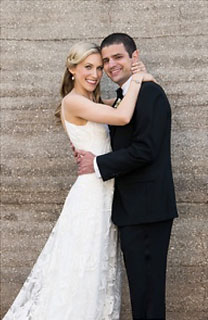 “Our choice of Temple Israel is largely because of the relationship forged with Rabbi Olshein, beginning with Kristen’s first meetings with her about converting to Judaism. It’s as if we hit the jackpot, with the congregation equally as special as she is. From the moment we walked through the doors we were greeted with open arms, smiling faces, and we knew we made the right choice. Our expectations of synagogue life were for it to feel natural, feel like home, and for it to help us gain greater self-awareness, bring us closer to one another and to others. Temple Israel has fulfilled every expectation so much that after a year of studying with Rabbi Olshein, Kristen completed her conversion and had her mikveh in the ocean. And, Rabbi Olshein married us in 2018. Temple Israel is a place where you will always be greeted with kindness and you will walk out with the tools to better yourself and your life.”